Happy National Hispanic Heritage Month! From September 15 – October 15, we are proud to celebrate the Hispanic-Latinx community and its contribution to the field of personal finance! 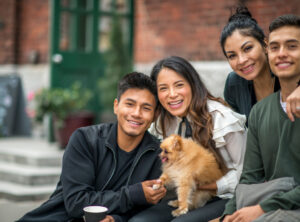 What’s the difference between Spanish, Hispanic and Latinx?

The term Hispanic describes a person who is from or has ancestors from a Spanish-speaking territory or country. Latino, Latina and Latinx are geographic terms, which refer to a person from Latin America or of Latin American descent. The word Spanish refers to both a language and a nationality. These terms may be used interchangeably by the people who identify, but it’s important to understand their differences. Read more.

Which is more proper—Latinx, Latine, or Latino?

Latinx and Latine were created in an effort to be more gender neutral when speaking in Spanish. Read more.

In recognition of National Hispanic Heritage Month, the AFCPE DEI Task Force has identified three key things to understand when counseling Hispanic clients and their families.

1. Understand the role family and community play in financial planning for Hispanic-Latinx clients.

For Hispanics, a strong sense of responsibility towards family and community is both central to their values and an important priority for financial planning. Many Hispanic-Latinx families live in multigenerational homes, and budget and plan accordingly. It’s also common for Hispanics to provide financial support to other family members – even when not living in the same home.

Provide stronger guidance for your Hispanic-Latinx clients by gaining a deeper understanding of the financial challenges and disparities that face Hispanic-Latinx Americans and which tools can be most effective for building financial capability.

3. Review AFCPE resources and webinars that are geared towards working with Hispanic-Latinx clients.

Last year, we compiled a list of articles, resources, and research from our staff and AFCPE Members. Check it out here!

AFCPE knows that personal finance and our relationship with money is not one-size-fits-all. We celebrate national heritage months with two goals in mind: (1) As a way to educate financial professionals on how different identities, cultures, and customs may affect finances or our relationship to finances. (2) To celebrate the various backgrounds of our diverse and inclusive community.