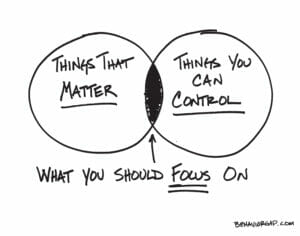 Carl Richards, CFP® has written two bestselling personal finance books: The One-Page Financial Plan and The Behavior Gap. He also created the Sketch Guy column that appears weekly in the New York Times. His books as well as his sketches take a behavioral approach to money management. Richards emphasizes “financial success is more about behavior than it is about skill”.  Richards helps make personal finance a little less scary. He shows individuals how to take simple but meaningful steps toward financial success. Richards tends to bring readers back to one key question, “why is money important to you?”

At this year’s Symposium, Richards gave an enlightening talk titled “Behave”. In it, he initially flipped the perspective from a client’s relationship with money to his own. He offered the following seven personal observations on money and financial management:

“I don’t know how to talk about money.”

Here, Richards revealed anecdotes about difficulties he has had discussing money with his wife.

“I can’t figure out how much is enough.”

Richards also shared that he too suffers from the human problem of insatiable desires. He noted that while our financial resources are finite, our desires are infinite.

“I want someone to tell me the future.”

Richards explained how much easier some decisions would be if we had perfect certainty about future events.

Richards shared his struggles with controlling spending considering the imbalance between resources and desires.

“I am always comparing myself.”

Richards admitted that often he – and his clients – measures success relative to the accomplishments of peers.

“I have blind spots.”

Richards confessed to other human flaws as well as his own ability to see those flaws at times.

Richards noted the magnitude of the impact of financial issues on so many aspects of our lives.  He then admitted that the weightiness of the issue is frightening to him.

I was struck by just how ‘human’ these observations felt. Richards’ forte’ is making complex financial concepts easy to understand. In this instance, the complex financial concept he focused on is relating to our clients. Richards showed how he, as a world-renowned expert, faces the same issues that those whom we counsel face regarding money. These observations and Richards’ accompanying sketches emphasized his key point.

Our clients have many of the same fears and concerns that we have. However, we can help them overcome those issues. The key to doing so is to be empathetic. His message was that it is acceptable for us to show our human side to our clients. Helping a client solve a problem includes understanding how the problem developed and how it makes them feel. How do you show this level of relationship-building empathy? Richards advised that the best way to is to demonstrate that you often have the very same feelings. That type of sharing may feel uncomfortable to some of us. However, Richards pointed out the value in showing our softer side.