Is Buying a House a Good Investment? (Not compared to buying stocks… but that doesn’t mean you shouldn’t do it)

Thank you to this issue’s contributors:

A house is the largest asset that most families will ever own. It is also the most emotionally-meaningful. Over the past two decades, housing values have increased significantly, even doubling or tripling in cities like New York and San Francisco. These dynamics result in the conventional wisdom that renting is “throwing money away” while buying “builds equity.” This article analyzes those assumptions while addressing the question, “is buying a house a good investment?”

The arguments for homeownership are convincing enough that both of the authors have purchased a house in the past year. Our reasoning included some combination of the following:

These reasons are valid and importantly, they are entirely non-financial.

If the Decision Were Purely Financial, You Are Probably Better Off Renting

A properly-constructed ‘Rent versus Buy’ model will typically reveal that renting is the financially-optimal decision. The logic is driven by two factors:

First, the costs of homeownership are significant. These costs, which renters largely avoid, are almost always underestimated. They include:

Second, the opportunity costs of homeownership are enormous. The more important, but less obvious, downside of buying a home is the opportunity cost. Money used for a down payment and mortgage (above what would have been spent on rent) could have been invested elsewhere. Any analysis of the financial implications of homeownership therefore must compare the expected return of a house to the expected return of other investments, most notably stocks.

Stocks Have Outperformed Housing Over Any Meaningful Time Period 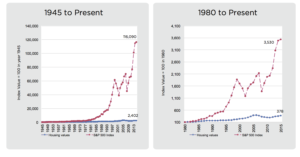 Academia’s most prominent housing expert reaches the same conclusion: Yale economist (and Nobel Laureate) Robert Shiller measures nationwide home prices going back to the 1890s. His data reveals that from 1890 — just three decades after the Civil War — through 2016, the annual real (meaning, inflation-adjusted) return of home prices was just 0.4 percent. Put another way, home prices have kept pace with inflation, but have provided no meaningful return above that.

As Shiller said in an interview:

“If you look at the history of the housing market, it hasn’t been a good provider of capital gains. It is a provider of housing services… To me, the idea that buying a home is such a great idea is just wrong.”

So Why Do People Think Housing Is a Good Investment?

Conventional wisdom says that buying a house is the wise financial decision while renting is “throwing money away.” Why does this idea persist, despite overwhelming evidence to the contrary? Here are some theories: 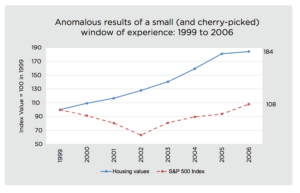 Does this time period cover a meaningful portion of your direct personal awareness of housing and stocks? If so, we all have a strong cognitive bias to extrapolate based on our (limited) personal experience, which in this case would be a mistake.

Why Do Stocks Have Higher Returns than Housing?

Books could be written on this topic, but the critical distinction is that houses don’t produce anything, while companies do. Businesses exist to maximize earnings and the growth of those earnings, and stocks capture these efforts. In contrast, the value of a house is based more on supply and demand dynamics than its inherent productivity.

Common Objections and Our Responses

But I use leverage on my house, so the returns are magnified! Thus far in this analysis, we have ignored the fact that most houses are leveraged via a mortgage, which magnifies returns. Of course, stocks could also be leveraged, but most people (wisely) choose not to. An “apples to apples” comparison would have the same result—the levered returns on stocks are much higher. And remember: leverage works both ways, as many people learned in the housing crash of the late 2000s.

But I get a tax deduction on my interest expense! We often hear people talk about the benefit of the tax deduction for mortgage interest expense and property taxes. These are indeed valuable. But the impact of these deductions is simply to reduce the cost of the interest and taxes paid, and does not come close to making up for the difference in returns.

But interest rates are so low! Again, this simply serves to reduce the cost of interest and does not close the gap between housing and stocks. It is also important to understand that when interest rates are low, the prices for assets purchased with leverage, like houses, tend to inflate, which often outweighs any benefits of borrowing at a low rate.

But stocks are overvalued right now, so future returns will be lower! We don’t know if stocks are expensive, or cheap. Empirical evidence suggests that nobody knows. Markets are generally efficient, so stocks are probably worth what they’re trading for today. Housing markets also tend to be efficient (and similarly difficult to predict), so the same logic applies. Attempting to “time” either market is a dangerous game and not worth playing.

But San Francisco (or New York, or DC…) is different! Admittedly, the housing data above is national, and the graphs would look different if they included only the major metropolitan areas that have exhibited the greatest appreciation. City-specific housing data doesn’t go back as far as national data, but an analysis going back to 1987 makes it clear that stocks have vastly outperformed housing values even in the hottest markets for real estate. 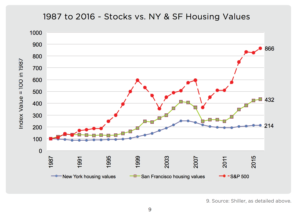 But paying down my mortgage is a form of “forced savings” and prevents me from spending the money elsewhere! For some people, this is a valid point. While it’s more of a behavioral argument than a financial one, that distinction may not matter. The opportunity cost analysis assumes that you would take the money saved (by not buying a house) and invest it in stocks (or a diversified portfolio). If you fear that you might instead be tempted to spend the money elsewhere, having a mortgage that forces you to build equity through monthly payments could create some needed discipline. If that sounds like you, buying a home might be the right financial decision.

There are many good reasons to own your home, and we fully support our clients in doing so. Just be mindful: if you decide to buy a house, you should be doing it because it is life-optimizing, not returns-optimizing. If maximizing our net worth were our only criteria, just about all of us should rent instead.

Our favorite ‘Rent versus Buy’ calculator is available on the New York Times’ website: http://www.nytimes.com/interactive/2014/upshot/buy-rent-calculator.html

Here we discuss only the financial opportunity cost. Of course, there is also an opportunity cost to your time and energy. Homeownership inevitably involves more work and stress than renting. Your time is valuable; any time spent on housing headaches could be more profitably allocated to your career or more joyfully spent elsewhere.

Timothy J. Corriero, CFP® is a partner with Geometric Wealth Advisors in San Francisco. He has a B.A. from Colgate University and a J.D. from Harvard Law School.

Andrew S. Leonard, CFP® is a partner with Geometric Wealth Advisors in Washington, D.C. He has a B.A. from Emory University and an M.B.A. from Harvard Business School.

This resource is available to AFCPE® Members.

If you are a member, please login here.

Learn more about the value of AFCPE® Membership here.