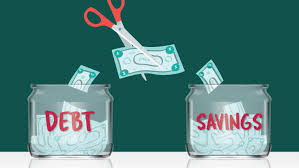 In a recent Associated Press health poll, approximately 10 to 16 million people in the US have reduced physical health due to high debts. For those with self-reported high debt stress, 27 percent had ulcers or digestive tract problems compared to 8 percent who reported low debt stress.  Moreover, the potential of suicide increases among financially distressed individuals as debt levels become harder to manage. Like many before us and many who will follow, the pursuit of solving the personal debt crisis remains an enigma. Nevertheless, theories abound as to the solution.

Conversely, not everyone views debt as problematic and opinions vary.  Some claim its convenient or necessary while others say it can be destructive or even unnecessary.  Regardless, it’s inevitable that debt is here to stay and, in this day and age, the use of credit cards, mortgages, etc., if used properly, can easily offer convenience for the user.

Interestingly enough, according to historian Jonathan Kenoyer, the idea of using a worthless device to represent a bank transaction dates back 5,000 years when the ancient Mesopotamians used clay tablets to conduct trade. But it wasn’t until the 1800’s that merchants started using credit “coins” and charge “plates” as a means to give farmers and ranchers the chance to defer paying bills until crops were harvested or cattle were sold.  Then in the early 1900s, some U.S. department stores and oil companies started issuing their own brand-named cards (the forerunner to today’s store cards). The first “universal” credit card (Diners’ Club) soon emerged in 1950 due to the rise in traveling salesmen with American Express soon following in 1958.  Consequently, the era of the credit card was born.

It’s clear that based on its lengthy history, debt is here to stay.  Although initially intended to be a means to a better end, debt has turned into a national crisis due to its overuse and misuse–and it only continues to rise. According to Debt.org, in Q2 of 2019, home mortgage debt rose to $9.4-trillion, auto debt climbed to $1.3 trillion, student loans hit a record $1.48-trillion, and credit-card loans crossed the $1 trillion mark. Although a good sign of recovery from the recession, these numbers represent an increase in our dependence on debt.  But why?

Lack of income, medical bills, credit cards, and instant gratification often surface as reasons for a debtors’ liabilities.  Sadly, technology and social media has only fueled the “instant gratification” fire by adding to a society that is accustomed to getting what they want, when they want it.   Nonetheless, instant gratification is one of the most basic human drives (coined as the pleasure principle by Sigmund Freud). Therefore, it’s unreasonable to think we can circumvent human nature.

On a much broader scale, events such as the 2005 Bankruptcy Protection Act caused an uptick in the household debt crises. Because the law made it harder for the household to declare bankruptcy on consumer debt, homeowners began using equity in their homes to pay off their bills. As a result, mortgage defaults rose 14% in a year.  Medical expenses typically are the cause of half of all bankruptcies in the U.S. (The Balance, US Economy and News) while a sudden loss of income or increase in costs, economic change, and education loans also create household debt.

Irrespective of the peripheral factors that contribute to household debt, one thing we know for sure is that the debtor is more often than not unable to see beyond the long-term effects of borrowing money. Therefore, if someone wants to improve their debt situation, they should instead turn their attention to factors within their own control and embrace “things they can do something about” (The Circle of Influence, The Seven Habits of Highly Effective People, Stephen R. Covey, Simon & Schuster, 1992).   Ideally, if we take a look inward, that is, into the very heart of the debtor’s household, one feature that seems to surface time and time again is a lack of savings.

Statistically, factors such as age, culture, and interest rates (to name a few) influence savings but they do more so on a global level.  On a personal level however, households have little to no control over these components. During the housing crisis of 2008, Americans were saving in negative digits.  Although economists (mostly) believe we are in a recovery, many Americans are still struggling to climb out of debt. Although we’re doing somewhat better, nearly 3 in 10 (28%) U.S. adults have no emergency savings and one in four have a rainy-day fund.  Sadly, it’s not enough to cover three months of living expenses.

When a household has trouble saving, they’re often at a loss as to what they need to do to ‘become’ a saving household.  Hence the adage, “How can someone change what they don’t know?” One thing we do know for sure is that the non-saver household will, at some point, experience the effects of an insufficient savings and that’s debt.  More often than not, the debtor doesn’t realize that it is a combination of factors contributing to their lack of saving or their inability to save.

Like debt, non-savers and experts alike can name a host of reasons for an inadequate or non-existent savings. Two reasons that seem to surface time and time again are a lack of knowledge and poor habits.  These two combined can make a cocktail for debt disaster. Conversely, although the knowledge factor can be rectified with a bit of time and effort the habit aspect can relentlessly sabotage all of the knowledge in the world.  More often than not, when a non-saver realizes the importance of saving then makes an effort to do so, an event surfaces that circumvents their best efforts and they get discouraged and simply fall back into old habits. Ask anyone who has tried to change a habit (especially a non-saving habit) and they’ll undoubtedly tell you they fell back to their old habit(s) at least once if not several times.

That being said, the long-standing question remains—can somebody simply choose to ‘change a habit’ at-will and turn around a poor savings habit enough to start (and maintain) a savings worth boasting about?  Considering all the factors that influence saving…probably not. But, it’s not to say that a non-saver can’t become a saver…on the contrary, they absolutely can! The point is that doing so may not be as easy as it seems.

Take the following example.  It demonstrates the connection between a nonexistent savings and other financial and health related issues.

Let’s be clear—this comparison doesn’t represent all non-savers nor does it mean that all non-savers will end up with health issues.  What it endeavors to demonstrate is the potential cause and effect of not saving and that a lack of savings is more than likely contributing to their debt.  Therefore, if a non-saver wants to break the cycle of debt, they need to begin with recognizing that simply cutting up their credit cards is not a cure-all. We need to help the debtor gain ground by understanding what caused their debt in the first place and that savings plays a critical role in helping them break the chain of debt and reach their financial goals.